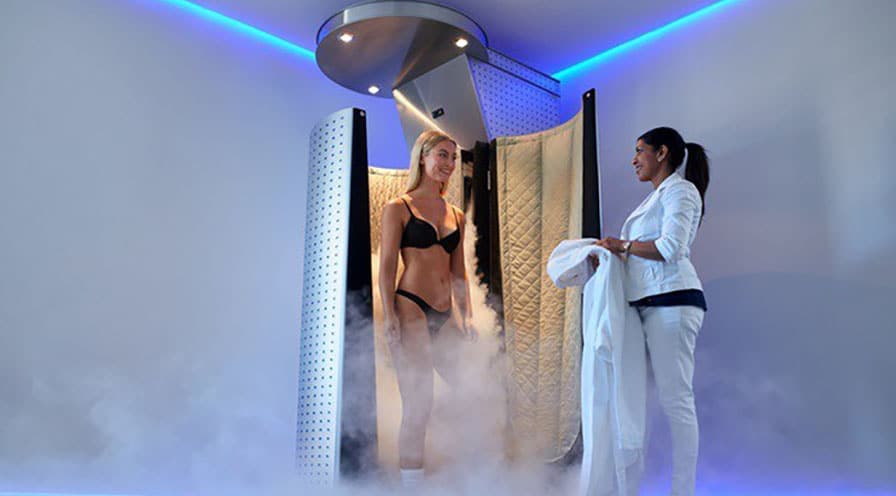 A revolutionary method of cold therapy exposing the body to subzero temperatures ranging between -130 to -150 degrees. During the 3 minute treatment, the body is cooled through the use of liquid nitrogen mist that stimulates the skin’s receptors to constrict the blood vessels and rush blood back to the body’s core where it is oxygenated and enriched. Post treatment, blood vessels dilate and rush supercharged blood full of anti-inflammatory proteins, endorphins and oxygen activating all of the body’s natural healing ability. Whole Body Cryo (WBC) is fast and super effective. 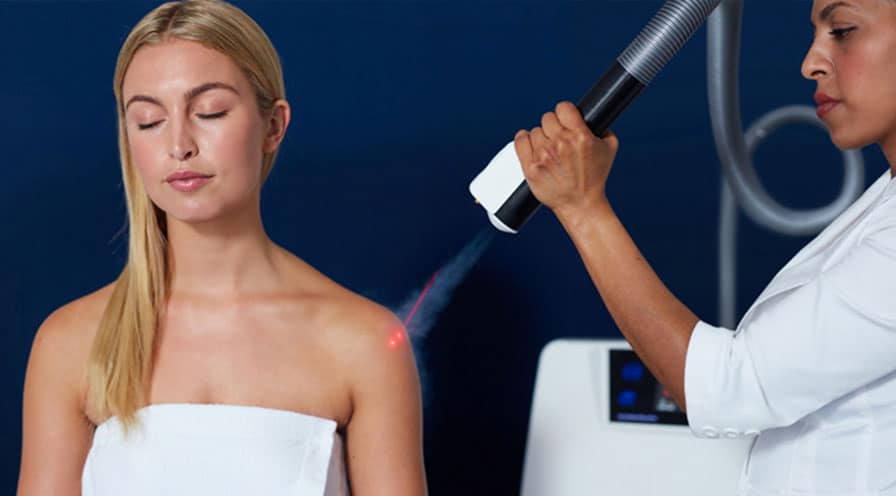 Extremely efficient in reducing pain, inflammation and swelling in targeted areas by the application of vaporised liquid nitrogen directly to the affected areas. The cryogenically cooled air creates a powerful cooling of specific region that penetrates deep into the layers of tissue, increasing blood circulation and reducing muscle related tension and soreness. Sessions range from 5-10 minutes and are commonly used in combination with whole body cryotherapy for a super charged extremely effective treatment of a specific region of the body. 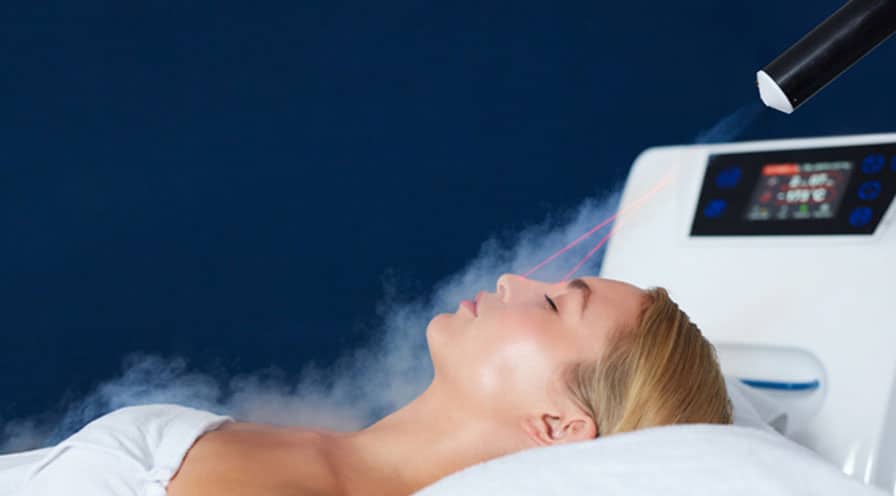 A safe, natural alternative to expensive invasive surgical procedures for achieving anti-aging results. Cryo Facials or Frotox as its sometimes called uses a stream of vaporised liquid nitrogen to cool the skin, this treatment produces an instantaneous tightness in the skin, filling in fine lines, and wrinkles. Toxins and other stored deposits are flushed out of the layers of the skin and circulation is improved after several treatments. If you’re looking to boost collagen naturally a Cryo Facial is for you.

Cryotherapy reduces recovery time and muscle soreness by acting as anti-inflammatory and allowing you to train, recover, and perform at the optimal level.If you’ve tried everything to get rid of those aches and pains that come post workout with age and stress, use Cryotherapy to:

Pain relief effects of cryotherapy are related to key changes occurring in the body. First, the neural pathway signal is slowed. Reducing the amount of nerve signals getting through to the brain. Secondly nor-epinephrine levels increase at a robust level. This stress-induced chemical reduces pain sensitivity as a protective mechanism whilst in extreme temperatures as well as being an anti inflammatory. If you’ve tried everything to get rid of those aches and pains that come with age and stress, use Cryotherapy to:

Cold therapy has been used for decades to slow down the aging process, achieve tighter smoother skin and enhance wellness and health If your preference is to have natural non invasive beauty benefits Cryotherapy will:

Increases metabolism, due to the:

Optimises mental performance, due to:

Reduces inflammation, due to the increase in norepinephrine, which has been found to:

Increases the activation of very potent genetic antioxidant enzymes (which are exponentially more powerful than supplemental antioxidants) – including glutathione reductase and superoxide dismutase – which are in your mitochondria preventing damage to important cellular components every second of the day. This antioxidant activity plays an extremely important role in helping your body to stay healthy and cancer free.

Increases athletic performance due to the reduction in inflammation and increase in anti-inflammatory factors which play a role in muscle repair. Furthermore, research suggests that the production of a cold shock protein called RBM3 may serve as a generalized mechanism for preventing the loss of muscle mass.

Improves sleep quality, due to the:

Increases the production of collagen in your skin due to the significant increase in blood flow from the short lived constriction of blood vessels which is then followed by a dilation. Collagen production has a direct influence on improving the elasticity and firmness of your skin thus reducing cellulite. Cryotherapy has been found to have a positive effect on the regenerative process of the skin.

Inhibits harmful collagenase activity on collagen, which is an enzyme that breaks down collagen. Cryotherapy has been found to have a positive effect on the age-related process of the skin 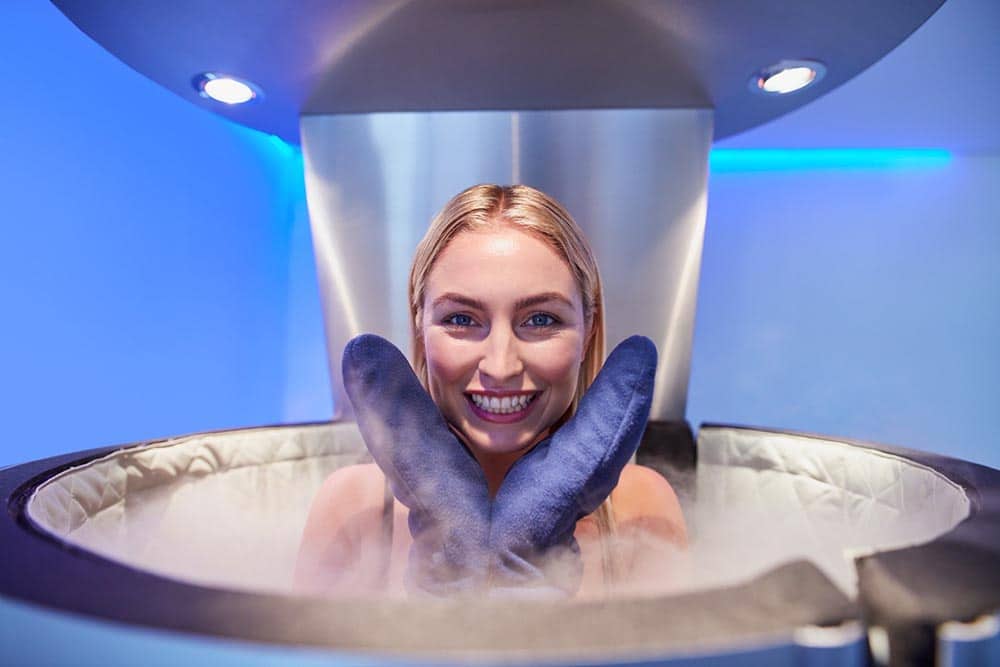 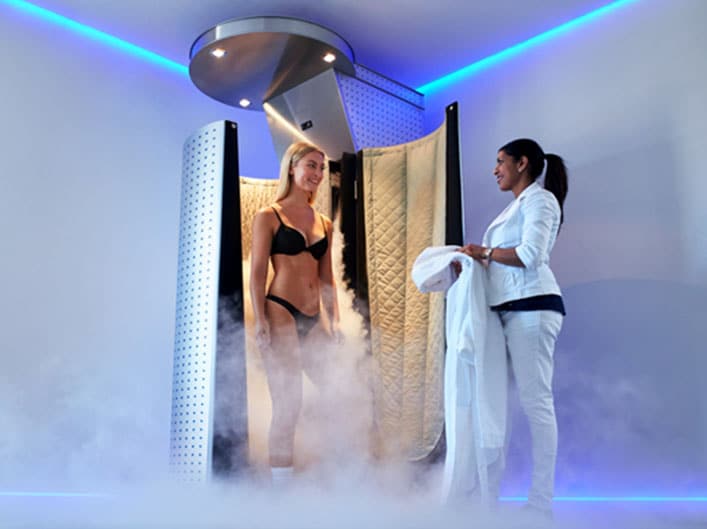 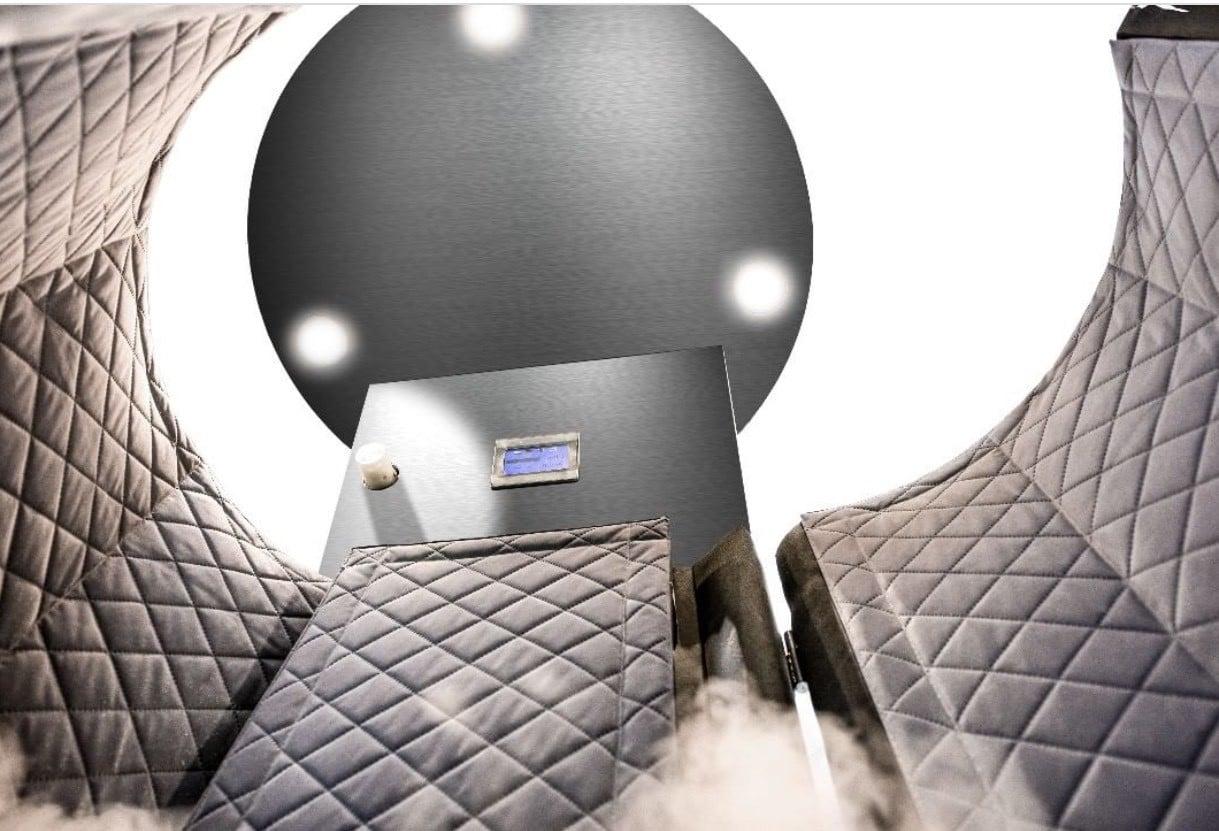 What are the main reasons someone would do Cryotherapy?

There are numerous benefits to undergoing consistent Whole Body Cryo therapy treatment. Some examples include:

What should I expect my first time trying Cryotherapy?

Upon entering you will be greeted by one of our friendly “Freeze Therapists” who will ask you to fill out a new client questionnaire and waiver form. You will be directed to a dressing room where you can place your clothes and belongings and change into your comfy NC robe. Guys need to keep some underwear bottoms on, while for the girls underwear is optional (the more skin exposure the better). Next its time to step into our Cryosauna! Once you are inside and the door is closed, you will take off your robe and hand it over the side to the therapist. The session will begin with a burst of hyper-cooled air which will circulate around your body. The temperature will begin to drop rapidly and your body and brain will respond in some amazing ways! If this is your first time doing cryotherapy with us, the session will only last a little over 2 minutes, and the cold intensity will be less than that of our typical session. After the session is complete you will be handed your robe and escorted back to the dressing room. Enjoy the rush! We want every experience at Coastal Cryo to be a positive one. Book an appointment by calling in, visiting our website, facebook page or just by walking in to our clinic.

Who shouldn’t do Cryotherapy?

Anyone with who is pregnant, severe heart conditions has very high blood pressure, or has a cold allergy should not do Cryotherapy.

I don’t like being cold. Is Cryotherapy going to be miserable?

Think of doing Cryo like doing some vigorous exercise…chances are you don’t find going on a jog or lifting weights very comfortable, but you love the way you feel after and you are able to endure the challenge because you are mentally prepared for it! The fact is some people have a higher tolerance to the extreme cold than others. We have multiple different settings on our Cryo Sauna that can be tailored to your particular tolerance level- this is why your first session with us will always be shorter and less intense just to figure out what will be best for you moving forward. Doing Cryotherapy is nothing like doing an ice bath or even jumping into the ocean in winter (ouch!) so if you have done that before, you can expect this to be much easier!

Is it better to do Cryo before or after my workout?

Its your call! The only thing to consider is that we need your body and underwear (if applicable) to be DRY. If you are just coming in from having finished an intense workout and are still sweaty then we suggest drying off and ensuring you are completely dry before commencing your treatment. If doing before a workout expect to train like you never have before based on the energy you’re about to receive.

How often should I do Cryo to notice the benefits?

The great thing about Cryo is that most people notice some of the benefits right away, namely an energy boost, an endorphin rush, and even a better nights sleep! To fully realize the benefits of Cryo we encourage you to do 3 sessions across a 7 day window. Post this phase it would depend on your reason for use that would determine the volume of treatment we suggest. After the first month of consistency, most people notice the more dramatic benefits of the Cryotherapy.

Why does a treatment only last 2-3 minutes?

Just a few minutes is all the time the body needs to fully respond to the cold exposure. The physiological response includes Vaso-constriction, the release of endorphins, and a drop in skin temperature of around 40 degrees. Being exposed to this level of cold for long periods of time would be dangerous, but as long as you are wearing socks and gloves, 3 minutes is completely safe and all that is necessary to promote the systemic benefit.

“If you want to relax, watch the clouds pass by if you’re laying on the grass, or sit in front of the creek; just doing nothing and having those still moments is what really rejuvenates the body…”.

Try the Cryosauna at our special introductory price.

Take some time. Treat yourself. You deserve it.